Here is the website I followed after reading many, many recipes. I really liked the lack of waste when she has you use the skins of the apple. With a good immersion blender, trust me, you really won’t know all that awesome fiber is actually in there! xD

I used about 40 apples and a 7qt crockpot for about 40 hours… it turned out awesome! Just be careful of the sugar. Start with 2 cups because my apples were kind of sweet… added another cup and never made it to 4. =)

Thanks Mir! Unfortunately the apples we’ve got don’t have the nicest skins so I think I’ll leave them out of the butter. Also lacking a crock pot/slow cooker unless we can borrow one from Cam’s parents. But can’t wait to try some apple butter. Also going to make apple sauce aswell as blueberry (we found miles upon miles upon miles of nothing but wild blueberries when we were out hunting), blackberry (they grow all over town) mix varieties and maybe some apple pie filling from that Born In the Wrong Century site. I think we’ve got enough apples to try the three things. 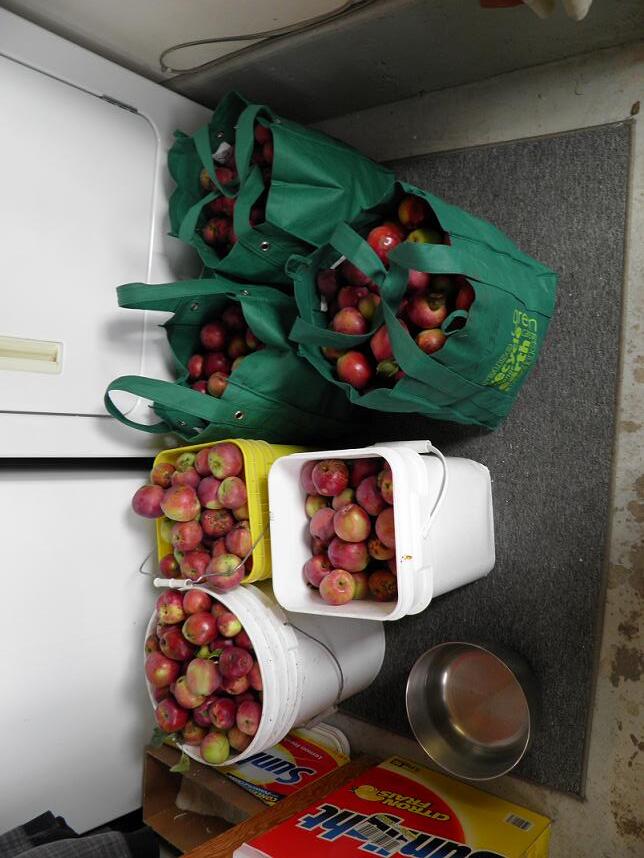 Used the one (biggest bucket on the left) to make plain applesauce today. Tomorrow is another bucket for apple/blackberry sauce unless I go out blueberry picking. Waiting on a friend of mine to decide if she wants to go or not. She’s a little worried about bears and it is bear country I’d be surprised if we didn’t run into one. Otherwise I’ll go out with Cam next weekend to pick.

Followed the recipe of the Born in the Wrong Century site, but just made a bunch (2 1/2 dozen) 250ml jars of apple butter today. Apple pie filling on the agenda for tomorrow.

In the saga of apples, finally got through them all! got 20 jars of apple pie filling, another 2 1/2 quarts + 7 x 250ml jars of plain applesauce. If I don’t see another apple until next year that’s fine by me. Next year I’d like to go back and dry apples again and make fruit leathers. It just doesn’t fit with my schedule this year to get that in (plus I’m all out of apples now)